skip to main | skip to sidebar

First we received the nomad’s challenge manual and started planning. We were one of the last groups to set off. We figured out the places on Appendix A and planned our route by sketching a map of Singapore, and roughly estimated where the places were. Although we had planned, but at this point of time we did not know all the landmarks yet.
We decided to take a train down to City Hall, and bought tissues papers along the way, which would be used for task 4, ‘Mind Your Own Business’.

For this task, we were not sure of how many packets of tissue papers we wanted to purchase and were very undecisive about it, thus from this we learnt the importance of making swifter and firmer decisions, and not to waste too much time. Along the way we also asked passer-bys for landmarks which we were unsure of. During our ride to City Hall, we also started on task 2, ‘Everyday Greatness’. When we reached City Hall, we sought help from the control station masters to assist in our planning, as we were still not sure of the route. Once we stepped out into Raffles Place, it started pouring. Adding on to the sudden rain, we were also unsure of where to head to – Fort Canning Park or the Asian Civilisation Museum, as both had the elephant statues. After discussion, we decided not to head to Fort Canning Park as it was out of the way for us. So began our walk to Asian Civilisation Museum. We saw the Elephant Statue after asking for some directions, and also found out that it was actually located at the Arts House @ Parliament House, not the museum. 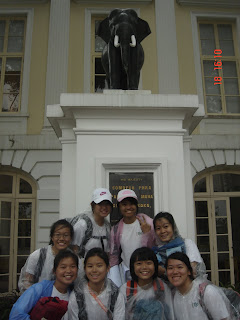 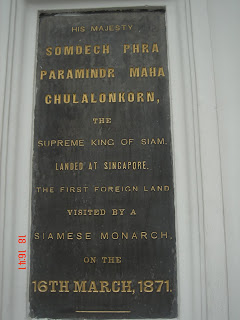 Our next station was the sculpture of the boys, located along Singapore River. Along the way, we encountered two tourists and decided to complete task 6, Uniquely Singapore. We put up a performance for them, singing ‘Deep in My Heart’, the national song for NDP 2005. We also gave an explanation of some unique traits found in Singapore, such as our multi-cultural society, our foods, kiasu-ness, and Singlish. They enjoyed our performance and engaged in our explanation, telling us about their experience in Singapore too.


After completing the task, we walked further down and found the sculpture, ‘The First Generation’. 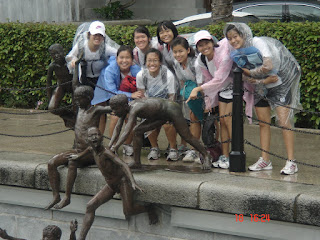 Along our way back, we completed task 5, ‘Coffee Talks, Hawker Walks’. We conducted an interview with the man on the street, asking him for his opinions on an issue which he, as a Singaporean, was most concerned about. He brought up the problem of our ageing population, and gave us his heartfelt comments on it.

Heading off from Singapore River, we met many obstacles on our way to our next stop, Marina Barrage. None of us knew the exact route to Marina Bay MRT or the shuttle bus station. So we decided to head towards Esplanade in the hope of getting a map of Singapore to guide us along for the rest of our grueling journey. In Esplanade, we also managed to book our camping permit from the AXS machine, which relieved us from the trouble of searching for the machine later on in our journey.
Upon attaining the map, we immediately planned out the route towards Marina Bay MRT. But due to the large amounts of construction works in town, we found many roads on our planned route were blocked or had no proper pavements for pedestrians. We decided to approach a man nearby for help and he advised us to take a longer but safer route to get to the MRT station. Following his advice, we took a long detour and ended up at Marina Station Road. Following signs found on the bus stop there, we finally ended up at the shuttle bus station to Marina Barrage. 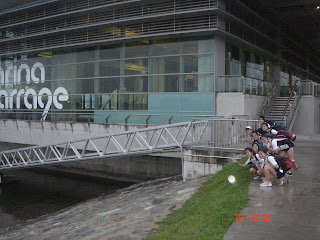 We took a shuttle bus back to Marina Bay MRT, and we decided to try a new route to get to the URA building, our next destination, to complete our task 8, ‘Facebook Madness’. After making a turn into a construction site, we continued walking and ended up at the spot where we had decided not to turn into initially. We realized that we had actually walked double the distance as we had made detours to and fro from Marina Bay. Retracing our detour that we had taken, we continued our journey and reached the URA building. But to our horror and disappointment, IT WAS CLOSED! ): We tried to sneak in, but was found out and chased out by the security guard. He refused to make an exception for us, as it had already closed three hours ago. But along the exterior of the building, we managed to grab a few shots of the Master Plan Singapore 2008. 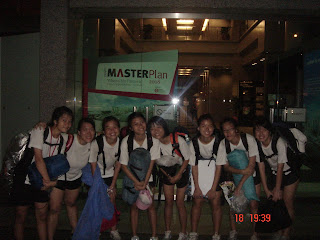 We had dinner at Maxwell Food Center, and managed to find a good deal, and had a superb dinner of fishball noodles from a stall which was featured on the newspaper for $2 per bowl! While a few of us were ordering and handling the food, the rest of Beta went around the food center selling our tissue packets bought earlier. They managed to complete the task before dinner was served, with a profit of $8. After that, we found out directions to get to Telok Blangah, which was SBS bus 145. Although we encountered a fierce bus driver, he still did tell us where to alight. Thus, we managed to reach Henderson Waves successfully. By that time, it was already dark. 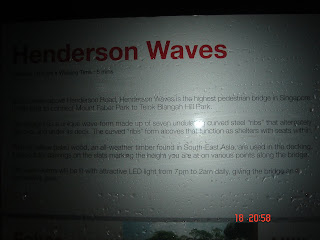 Following Henderson Waves, our actual plan was to go to Bukit Chandu, NUS, and lastly camp at West Coast Park. However, it was getting late and we decided to head to the park straight and complete the two stations tomorrow. However, we were confused about how to head to the Park. After consulting joggers, we were told that West Coast Park was a far distance and would take at least 2 hours. The time then was 9.40pm. Seeing us confused, Ah Hao offered to sell us his professional help for $20. We took it. However, it was not very helpful to our current situation. He presented us with two options we could take on – either walking or taking the bus. After discussion, we decided to walk to West Coast Park to save our bus trip for the next day. However, after walking for a few steps, we realized that it would actually take us longer than 2 hours to reach our destination after doing some calculations. Furthermore, given that everyone was feeling tired after walking the whole afternoon, we ended up taking bus 176 to West Coast Park.

We alighted at the stop directly in front of Macdonalds and washed up. We changed to a fresh piece of clothing, but did not bathe due to time constraint. To our surprise, the Sportsbra group was also there and were happily eating their burgers! After that, Ah Hao and Shu Mei conducted a debrief in a shelter nearby. They recapped the whole journey and all of us voiced our thoughts with regards to the whole journey. Ah Hao and Judy also shared with us their thoughts on our group’s performance as a whole, and their opinions of how we could improve and the things that we needed to work on. They mentioned that we were not observant enough, despite having ten people, and did not utilize our resources enough. Resources can be found anywhere on the go, and it is up to us if we decide to utilize them appropriately. But due to our fixed mindset focused on just completing the stations, we did not approach problems from multiple perspectives and did not offer ourselves any alternatives during our journey. Upon learning this point, we decided to pitch our tents beside the Sportsbra group, so that we could all work together for sentry duty and everyone could have more rest. Delta joined us later, and the end result was everyone only having to do half an hour of sentry duty. Just before lights out, we also planned and reflected, preparing for a better tomorrow!
Posted by Sher:)) at 11:59 PM